Merfolk and fans of the LEGO building system will enjoy seeing photos of the KR-KN Space Kraken by LEGO enthusiast, Iain Heath.

Also known as Ochre Jelly, Iain Heath has a larger photo of the KR-KN at his Flickr site. The Flickr site also has a link to the story behind the build.

"The LEGO Super Star Destroyer set has a bad rap as a big dull gray set. I decided to change that."

Swim on over to Geeks Are Sexy for the photos and links to more info.

As many of you have probably heard, Disney Pixar will be releasing the sequel to Finding Nemo on November 25, 2015. Finding Dory will focus on the adventures of the 'friendly but forgetful blue tang fish' which will be voiced by Ellen DeGeneres.

Ellen is excited about the script for Finding Dory. "It's got a lot more Dory", she says. 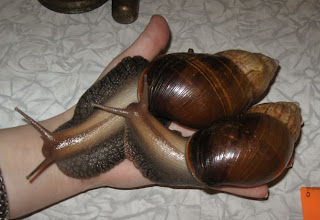 Merfolk as well as humans in southern Florida should already be aware of the Giant African Land Snail invasion that is hitting the area. These snails are huge (as snails go), eat just about anything green, and breed like crazy.

These are not the kind of snails you would want to keep as pets. In addition to green plants, the snails are quite fond of stucco and plaster. They can literally eat you out of house and home.

Read all about the slimy mess in an article by Barbara Liston at The Christian Science Monitor.

As promised, I have updated my March 26th blog post with further information on Mer-Palooza 2013.