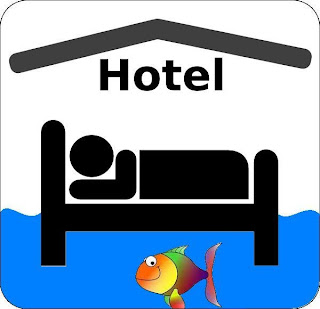 Looking for the perfect hotel for your vacation? Yahoo Travel and CNN Money have just what you need. A recent article by Julianne Pepitone explores six undersea hotels around the globe.

While a number of these undersea hotels are still in the planning stages, a few already exist.

A perfect place for a mermaid to relax at the end of the day, but would one be able to afford to stay there?

The web site EPBOT is all about Geekery, Girliness, and Goofing Off. In a recent post, Jen shares a number of great photos from Dragon Con. Number one on the list is a mermaid known as Christie.

Other notable photos from the collection include Kermit, Oscar The Grouch, Wonder Woman, Disney princesses, and a grumpy Tink. And, this is only part one!

If you are reading this blog post in bed, you should probably skip this topic. Just sayin'.

Matt Simon's Absurd Creature of the Week is going to be hard to beat... and equally hard to forget. The 10-foot Bobbit Worm has Matt's vote as the ocean's most disturbing predator.

"If you survive initially, you get to find out what it’s like to be yanked into the worm’s burrow and into untold nightmares."

Brace yourself, and then check out Matt's article in the Science section of Wired.

The younger mermaids in the audience may want to check out the new game League of Mermaids, which has recently been released for the iPhone.

"The new game is a puzzle title where players advance through increasingly difficult challenges."

I was planning on talking about this game earlier, but the title could not be found in the App Store when this related article by William Usher came out at iPhone Informer. You should be able to find it now.

Copenhagen's Little Mermaid statue is well known throughout the world. Recently, Kazakhstan unveiled their own mermaid statue in the city of Pavlodar. Everyone loved the new statue.

Is there such a thing as too much love? The mermaid thinks so. After only two weeks, the statue had to be taken down for repairs.

"She was particularly popular with newly-weds who insisted on having themselves photographed in front of the statue."

Check out the whole story in this article from BBC Elsewhere.