Incredible or terrifying? That is the question posed by this article by Lauren Smith in House Beautiful. We're talking about a unique swimming pool.

"A South London apartment complex is building the first-ever Sky Pool, made of eight-inch-thick glass and suspended 10-stories above ground."

The only thing this pool needs is a mermaid! 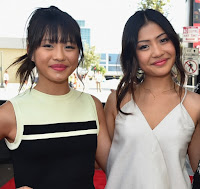 Project Mermaids is in the news once again. Actresses Brianne & Haley Tju were recently given mermaid makeovers, and their photo shoot produced fin-tastic results.

Both women described the experience as a dream come true.

Enjoy the photos in the article by Kristine Hope Kowalski over at Twist Magazine.

The Canadian mermaid school, Aquamermaid, continues to expand. There is great demand for mermaid and merman classes for both children and adults.

"Aquamermaid surfaced in Montreal in February, has just floated into Toronto and will make the leap to Ottawa come September."

Get the full story over at CBC News in this article by business reporter, Sophia Harris.

According to The Cut, a feature of NY Magazine, the hot new trend is... Mermaids. New? We've been in the middle of it for years, but now celebrities are diving in as well.

Kim Kardashian, Britney Spears, and Miley Cyrus are just some of the celebs that have recently realized that, "Life is better, down where it's wetter."

"Miley, of course, appears to have started the trend, sporting her mermaid tail back in July."

As I've said before, there won't be anyone left on land pretty soon.