When you think of mermaids, the word 'fire' doesn't usually come to mind. We're about to change that. Today, we are going to have a chat with MeduSirena, The Fire-Eating Mermaid. MeduSirena resides in Florida where she keeps a very busy performance schedule. I was fortunate to be able to ask her some questions. 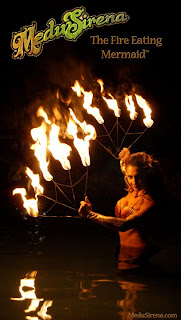 Cynthia: Greetings, MeduSirena.  Please tell us about yourself.
MeduSirena: I'm a performer who uses the aquatic environment as a platform for performance. It is my great ambition to help increase awareness of the almost forgotten art form of sub-aquatic dance (water ballet) and its establishments, and introduce it to a new generation, via performances & training to help assure its survival.

Cynthia: Your performances are far from ordinary.
MeduSirena: Well, they are a homage to a specific style, and its performers. The goal is to allow the audience to experience something unique- yet reflective of a very special time in aquatic performance history. The underwater spectacle. In training, the goal is to appear fluid and exceedingly comfortable navigating the liquid environment. To use the flow and abilities of water as an implement, that's the goal.

Cynthia: What can you tell us about the Aquaticats?
MeduSirena: The 'Aquaticat' is a student, apprentice or performer learned in the MeduSirena Method of swimming. The name is derived from 'Exoticats' - a well known Polynesian Pop culture term.

Cynthia: You were in Palm Springs recently?
MeduSirena: I had a wonderful time performing at the ACE Hotel and Swim Club pool in Palm Springs last month for the crowds at Palm Springs Modernism Week. I was there with the folks from Vintage Roadside for their presentation of 'Mid-Century Mermaids, a History' which chronicled the history of "Mermaid" theme aquatic attractions, past & present.

Cynthia: Your 'Home Pool' is the Wreck Bar? Tell us about that.
MeduSirena: It is where I train most of my performers, and where the MeduSirena Underwater Swim Show takes place. One of the last remaining pool porthole bars in the US, the interior is meant to resemble a sunken Spanish galleon. Back in its heyday, a bevy of rich & famous vacationers dropped in ranging from Johnny Carson to Marilyn Monroe. The establishment has been there since the 1950's, and underwater shows took place there 'till 1962. I introduced the swim show's return in 2006 in an effort to increase awareness of the classic Wreck Bar, and to revive & preserve the artistic integrity of aquatic shows. 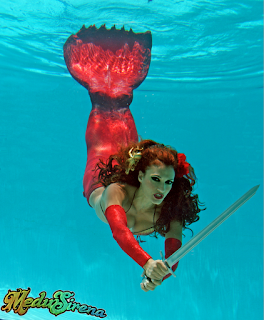 Cynthia: Do you do much ocean swimming? Any unexpected encounters with humans?
MeduSirena: Yes, living in Fort Lauderdale, I do get a lot of saltwater time. No human encounters are really unexpected, especially since the offshore area harbors the largest coral reef dive site in the US. Plenty of divers. Most are very kind and are quite intrigued with my "Sea Lion" influenced style of swimming around.

Cynthia: What would be your favorite mermaid themed books and/or movies?
MeduSirena: The Little Mermaid was indeed a fave as a kid- so much so that it really shocked me to see how it was changed for the Disney film version, and how most people now only know the Disney interpretation- which strays quite a bit from the original meaningful story by Hans Christian Andersen.

Any 'Mermaid' theme books I own tend to be more about their significance in cultural history- Such as Lu Vickers' Weeki Wachee books and any literature written about diving people- such as the Haenyo of Korea and Ama Divers of Japan (the REAL deal). Of course, Esther Williams and Annette Kellerman's Biographies are also faves.

As for Movies- 'She Creature' (2001) is my personally fave depiction of a "mermaid" in a film-  I do like the ones featured in 'Peter Pan'* (2003). Thom Shouse's work in Splash (1984) was terrific- I particularly enjoyed the added effects and details; the signs of stress seen on her body she began to show later when in captivity- but that must just be my marine biology geek talking. Besides the performers themselves it is very relevant, they are not CGI but real swimmers.

*Well they really didn't perform underwater in 'Peter Pan' (GRRR- how awesome would that have been?), but they were still badarse.

Cynthia: Tell us about working with sea life at an early age.
MeduSirena: Having grown up in the Caribbean- it was very much a part of my life. I will admit being a bit obsessed with science and animal programs, and listening to breakdowns of how animals move and function. That interest in animal physiology- particularly Marine animals, was the catalyst to the quest for connection through emulation. We always kept aquariums, and observed a bevy of species. In my mid-teens, I worked as a volunteer at the Clearwater Marine Science Center (yes, the very same place 'Winter' the dolphin currently resides) and continued my Marine Biology studies. There is always something to be learned by observing how creatures move and function- humans included.

Cynthia: You also began learning about free-diving at a very young age?
MeduSirena: My father was an avid boater and diver- He taught me to free-dive at 3 years of age. Living with such easy access to clear and beautiful waters- it was a necessary skill to learn. And thankfully, it is also a permanent aspect of what gives my personal existence "deeper" meaning. ('Tis my identity, perhaps?)

Cynthia: Anything else you would like to share with us?
MeduSirena: It would be truly wonderful to see aquatic performances continue to evolve for future generations. It is more than merely donning a 'fishtail'- that is but a costume- as a tutu is for a ballet dancer. For me- it is about navigating efficiently in the underwater environment. If my work contributes to it in any way- by entertaining, or allowing the audience to see and experience something unique and be influenced positively... or perhaps be inspired...

Yes- that would be wonderful--if that happens, when my time comes I will happily disperse into Sea Foam as the Little Mermaid originally did- knowing I have done my job.

Cynthia: Thank you, MeduSirena, for speaking with me, and thank you all for reading!  Here are some related links: MeduSirena Web Site | Facebook Page | Newspaper Article