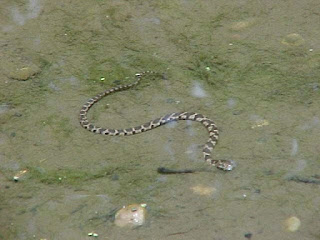 Let me start this blog post by wishing everyone in the US a very happy and festive Thanksgiving! I am very thankful for my readers, those across town and those across the seas. Hugs and splashes to all! Join me now as we peek inside today's News Shell. 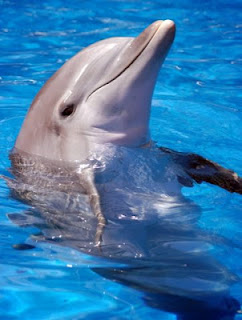 Is That a Person?

A recent article by George Dvorsky asks an important question, "When does an animal count as a person?" It is not hard to think of merfolk as people. What about dolphins? They are quite intelligent, perhaps more than we give them credit for. What about chimpanzees and other primates?

As Mr. Dvorsky explains in his article, a number of scientists, legal experts, and others are supporting the idea that some non-human animals are persons and deserve human-like legal protection.

How do you define a person? Read the article at io9.com, and share your views in the comments section below. The comments found below the article are for the most part in disagreement with the animal as person concept.

If you are a young adult (or a young adult at heart) and you love to read, then you should know about Bittersweet Enchantment, a blog by a nice lady known as Becky. Recently, Becky welcomed Annie Rachel Cole who talked about her fantasy novel, Guardian of Atlantis. The novel is centered around Greek Mythology, and specifically Medusa and Poseidon.

"Sixteen-year-old Raven Weir has a somewhat normal life until she receives a mysterious necklace... a necklace others are willing to kill her to get because it contains the key codes to Atlantis." Looks like someone's normal life is about to change. Read Ms. Cole's entire guest post for all the details, including her inspiration for the story.

The blog post also contains a link to Amazon, where you can purchase Guardian of Atlantis in paperback for $9.99.

The following was written in 1830 by Alfred Lord Tennyson:

WHO would be
A mermaid fair,
Singing alone,
Combing her hair
Under the sea,
In a golden curl
With a comb of pearl,
On a throne?

The full 3-stanza poem can be found here.

Clarkesworld Magazine features science fiction, non-fiction, and fantasy reading from a variety of authors. The magazine also features podcasts of selected titles and works of art.

In an article on Clarksworld that recently ran on a web site called 'Whatever', John Scalzi points out the benefits to subscribing to Clarksworld Magazine... benefits to both authors and readers.

The current issue of Clarksworld (14 Nov 2012) contains a short story by Maggie Clark called Aquatica that makes for interesting reading. 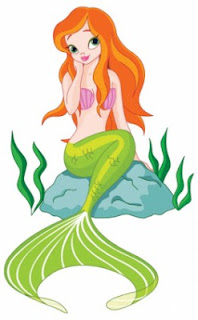 I know a number of mermaids that are also authors. Be sure to visit the Submission Guidelines page to see how to get your science fiction or fantasy story published at Clarksworld.

At each change of season, mermaids and mermen wait in anticipation of the next issue of Mermaids & Mythology Magazine. The web site has subscription details as well as information on the current issue.

Find the perfect photo of you splashing around and send it to info@mermaidmagazine.com for inclusion in the Your Photos section! Mer themed artwork is also accepted.

Posted by CynthiaMermaid at 9:50 PM No comments:

Welcome to blog post number 70! A big splash of thanks to my regular readers! You are Fin-tastic!

As we discussed in my October 28th article, there is so much more for us to learn about the oceans of our planet. In late 2010, the world's rarest whale was spotted for the first time when two of them were found dead on a beach in New Zealand. Scientists knew of its existence from skull fragments, but this was the first time they were actually able to see one.

The whales are known as Spade-Toothed Beaked Whales.

Thank-you splashes go out to Caroline W. for first showing me this article. 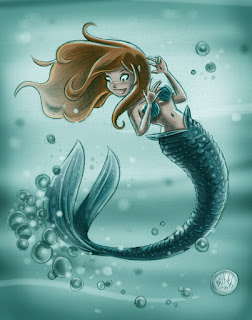 Since June 2012, Black Mermaid Productions of Australia has been sharing examples of mermaids in comics that they have discovered. Their latest blog post in the series is their November 6th edition, Mermaids in Comics 5, which features Lucia and the Golden Mermaid. Be sure to look through the past blog posts from June to the present for the other Mermaids in Comics articles.

Lucia and the Golden Mermaid, what a great name!

Recently, I have had less time to search the seven seas for qualified interview candidates. If you or someone you know would like to be interviewed for this blog, please contact me at the email address below. Individuals and performance groups are welcome. Thank you!

What did the sea say to the Little Mermaid?
Nothing, it just waved!

This and other awful mermaid jokes and riddles can be found at JokesPrank.

Posted by CynthiaMermaid at 9:22 PM No comments:

Tossed on the seas for several days, our latest News Shell finally reaches its destination. As I am originally a New England mermaid, my heart goes out to those affected by hurricane Sandy. I would like to wish my merfolk and human friends in the northeastern US a quick recovery. 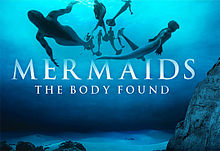 The faux documentary, Mermaids: The Body Found, originally aired on Animal Planet in May and caused quite a stir. Many people took the show to be factual, causing NOAA to issue a statement to the contrary. The show has also appeared on The Discovery Channel beginning in June where it found another group of eager listeners. Unfortunately, none of it is true. Is it ratings that causes networks known for their science and educational programming to run a fictional 'documentary' on a popular subject?

Wikipedia has a short article on the show which is worth a quick look.

As hurricane Sandy approached the New Jersey coast, a seafaring robot named Mercury was 100 miles offshore, transmitting storm data through 70-knot (80.5 mph; 130 km/h) winds. Read all about this hard working aquatic robot in an article by Tim Hornyak for C|Net. 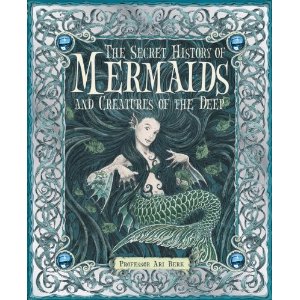 The Secret History of Mermaids

If you are a collector of mermaid-related books, here is one to add to your collection. The Secret History of Mermaids by Ari Berk is "a lavishly illustrated resource offering insight into the lives, origins, language, and magic of these elusive peoples."

Barnes & Noble and Amazon are both out of stock at present, but both offer the book from resellers.

Do you own this book? Please send me a short review and I'll feature it in a future blog post.

As you probably have heard, unless you've been hiding in a sea-cave, Disney has purchased Lucasfilm for US $4 billion. What influence will Lucas' Star Wars series of films have on the Disney characters we know and love? John Martz has come up with a few funny concepts, as featured in a Laughing Squid article by Scott Beale.

Would you believe Yoda with Mickey Mouse ears? And what would happen to The Little Mermaid?