A new book, 'Making a Splash: Mermaids (and Mermen) in 20th and 21st Century Audiovisual Media', was released on January 30th. Here are the details: 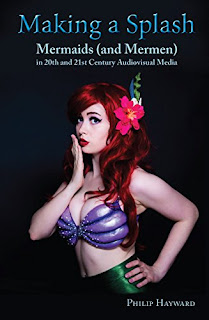 "Mermaids have been a feature of western cinema since its inception and the number of films, television series, and videos representing them has expanded exponentially since the 1980s. Making a Splash analyses texts produced within a variety of audiovisual genres."

The book's eight chapters include discussions on The Little Mermaid, Mermaid Vocality, The Mermaid Chair, Mermen on the Screen, and much more.

The author of the book is Philip Hayward. Dr. Hayward is editor of the Island Studies journal Shima and holds adjunct professor positions at the University of Technology Sydney and at Southern Cross University in Australia.

Making a Splash is available at Amazon, Barnes & Noble, and other booksellers.

The Daily Mail UK brings us an article about a wedding in the 'middle of the sea', the Caribbean Sea to be precise. The bride, Susana, believes she is actually a mermaid, and wanted her wedding to follow her passion.

The article includes a wealth of photos as well as a video. Even the photographer called the wedding, "a dream come true".

In my opinion, the best line from the article is, "Some guests swam to the wedding while others arrived by boat." Looks like the bride wasn't the only mermaid at the wedding.

Our next article comes from Danielle Tullo and Cosmopolitan magazine. If you are having a birthday in near future, or planning a birthday party for a mermaid fan, what you need is a mermaid tail cake.

A photo of such a cake, posted on Facebook, already has over 4.2 million views. Looks like everyone wants one for their very own.

Several photos of mermaid themed cakes are included in the article.

Sharon Ko of KENS-TV Channel 13 recently visited with four mermaids based in Austin, Texas to uncover the lure of the mermaid lifestyle.

The article may answer a lot of questions for those wanting to join in the swim. What do I need, how much does it cost, and what happens at public appearances? It's all here in the article.

The MerNetwork forum gets a mention as well.

Remember sleep-overs and the boring sleeping bags? No more! Enchantails by Mark Viniello and family brings us the tail-enhanced slumber bag. Inc.com and Kate L. Harrison have the story:

"Their new mermaid slumber bag sets each come with a themed storybook that blends real-life places in the ocean with longstanding mythologies about mermaids from around the globe."

The article includes a portion of an interview with the Viniellos by Inc.com.

Posted by CynthiaMermaid at 6:58 PM No comments: