Today (20 December 2015) marks the fourth anniversary of this blog!  A total of 225 Cynthia Mermaid articles have been posted so far, and they have generated over 103,000 page views.

Here are some of the most popular blog posts from the past four years:

Mako Mermaids - My post on the sequel to H2O: Just Add Water earns my most popular blog post award with over 3500 views.

Mermish 101 - A number of mermaid language dialects have been created, but which ones are actually useful?

Tail Makers - Ready to discover your inner mermaid or merman? Here is where you can buy yourself a tail.

Thank you all for your readership these past four years! Write to me at the address below so that I can help spread the word about YOUR mer activities. You may also write to request that I interview you for a future blog post.

Claire de Louraille of BuzzFeed would like to share 24 photos 'That will make you wish you went to mermaid school'.

"For starters, just look at how majestic this pod is."

You may recognize a few of the faces in the crowd! Merfolk do love to pose for photographs, and these will make you itching to dive in and join the fun. 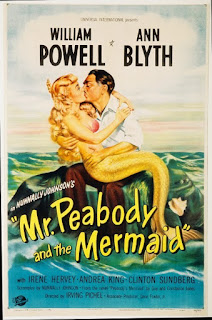 Each listing includes the reason that the duo believe the movie is iconic. The list begins with Miranda and Mr. Peabody and the Mermaid, both from 1948.

How many of the 13 movies have you seen?

Next, let us take a look at the article at LiveScience entitled Mermaids & Mermen: Facts & Legends. The first section of the article presents a short discussion of merfolk in ancient times.

Then, the article moves on to modern times, where we find that merfolk never lost their allure.

"There are many legends about mermaids and even a few dozen historical claims of supposedly 'real' mermaid sightings."

Chloe Grace Moretz, the lead in the live-action version of The Little Mermaid, recently shared some information about the upcoming movie. ET Online has the story.

Ms. Moretz noted that since the movie is more in line with Hans Christian Andersen novel than Disney's version, her character will have blonde hair instead of red hair.

"Moretz said that she's very excited to bring this new version of the famous fable to the big screen, and recalled the elation she felt when she first found out she had been cast as the eponymous mermaid."

At this time there is no announced release date for the movie.

A rare deep-sea squid, Taningia Danae (Whiplash Squid), has been caught on camera. CNN and NOAA present a one-minute video of the squid for all of us ocean fans to enjoy.

"An expedition in the Pacific Ocean captured footage of a deep-sea squid, which is rarely seen alive."