If you can't get enough Mako Mermaids, you will certainly want to join the folks at the Mako Island Resort web site. Here, Mako fans can meet other fans and learn more about the program.

Speaking of blogs, I was recently asked to be one of the bloggers there! You can find the blogs at the site under the More heading at the top of the page. 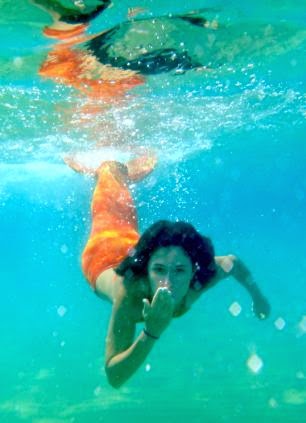 Europeans, now is the best time for you to discover your inner mermaid/merman. Europe's first mermaid academy is open for business.

Located in Tarragona, Spain, Sirenas Mediterranean Academy is ready to give you a complete body workout.

"Aquatic activity is one of the best ways to stay healthy and swimming with a tail makes large groups of muscles work together."

Read more in this article from The Daily Mail UK. The article includes a wealth of photos.

Nails of the Day

Hello Giggles presents: Nails of the Day. This edition is entitled, Mermaids are Real, and you can find out more in this article from 26 September 2014 by Sarah White.

Osamu Tezuka is one of the most influential animators in Japanese history. His cartoon, Mermaid, recently celebrated its 50th anniversary. The work premiered in September of 1964.

Daniel Walber has the story on Mr. Tezuka and Mermaid in an article at Film School Rejects. You can watch the entire cartoon there, too.

According to Animation World Network (AWN), Athena Studios will be producing an animated short film entitled, ‘Mermaids on Mars’.

"Mermaids on Mars will be released to film festivals in January 2015."

Read more about the project in an article by Jennifer Wolfe at AWN's web site. Look for the link to the film's Facebook page.

We all know that the oceans hold many wonders. In a story from this past July, deep sea explorers discover a creature that they hardly believe is real.

The creature is known as a siphonophore, and you can read more about it in this article by Stephen Messenger at IFL Science.

The Sip 'n Dip Lounge in Great Falls, Montana, knows that mermaids love music. They also know a lot more about mermaids, they even have mermaids swimming behind the bar.

Swim on over to the web site of Charles Phoenix, Ambassador of Americana, and read more about the mermaids of Montana.

“I used to spend my summers in Cape Hatteras. I would lean up against the lighthouse and imagine mermaids are swimming in."

Read more about Kelly's cute photographs in an article at KFOR TV.

Looking for inspiration for your first (or next) mermaid tail? If so, you should take a look at Makezine's story on Pearlie Mae's custom tails.

"Get a close-up look at the intricate works of mermaid couture that Pearlie Mae makes and see how she casts her scales and fins in custom made resin molds."

Beautiful tails, and great scale work. Be sure to take a look.

Fans of the Australian television program, Mako Mermaids, will want to drop everything and watch this official trailer for the upcoming second season. More merfolk for sure, and a fair number of plot twists to keep it interesting.

According to one of the comments below the video, Mako Mermaids season two will air in the spring of 2015. I will update you all if I hear differently.

A recent article at The Huffington Post shares with us 'Ten foods to eat for healthier hair'. This article by Dawn Wilder originally appeared at grandparents.com.

Mermaids, mermen and mer fans can all benefit from these great tips for healthy hair.

"From snipping it with scissors to dousing it with dye, you put your hair through a lot. And while it may seem tough, hair is actually extremely sensitive."

Eat well, your hair will thank you!

Mermaid Hannah Fraser is back in the news again this week. Claire Hodgson from Cosmopolitan UK has a great article that tells how Hannah got into mermaiding and how she keeps fit for the job.

"Being a professional mermaid is much harder than it sounds, though and it has taken a lot of training."

The article includes a photo gallery that detail some of the pros and cons of being a professional mermaid. Believe it or not, there are a few cons.

The Mermaids-By-The-Sea convention runs September 17th to 20th in Lauderdale-by-the-Sea. It is free and open to the public. I apologize for the late notice.

Find out more in this article from the official web site of South Florida.

Note to convention organizers: Get the word out about your upcoming events by contacting me at the email address below.

Right place at the right time... In this story from io9 Observation Deck, divers happen upon a stranger who needs assistance.

Watch the video, and be sure to catch the comments section.

Mermaid Hannah Fraser has inspired many to make mermaiding a hobby, or even a career. In addition to being a mermaid model and actress, Hannah is a leading ocean activist.

In an article found on Mashable, writer Andrea Romano tells us how Mermaid Hannah is committed to her splashy lifestyle.

"Mermaids may be a fantasy saved only for children's stories or Disney movies, but Fraser is as close as anyone can get to the real deal."

The article features a number of great photographs, so be sure to scroll all the way to the bottom.

If you enjoyed coloring the mermaid drawing in my August 26th blog post, you will also want this 3-D Mermaids coloring book by Dover.

"A fantastic underwater world springs to 3-D life with these enchanting illustrations."

The book includes 3-D glasses. The book may be purchased from Amazon for $5.39, or slightly less from independent sellers.

Stylish Eve presents 14 very adorable merbaby photographs. Many different photographers, and each photo is priceless. Credit goes to David Dundas for putting this collection together.

"We’ll admit that there is nothing more beautiful than a sleeping baby, but when that baby is a merbaby then the look is even more serene." 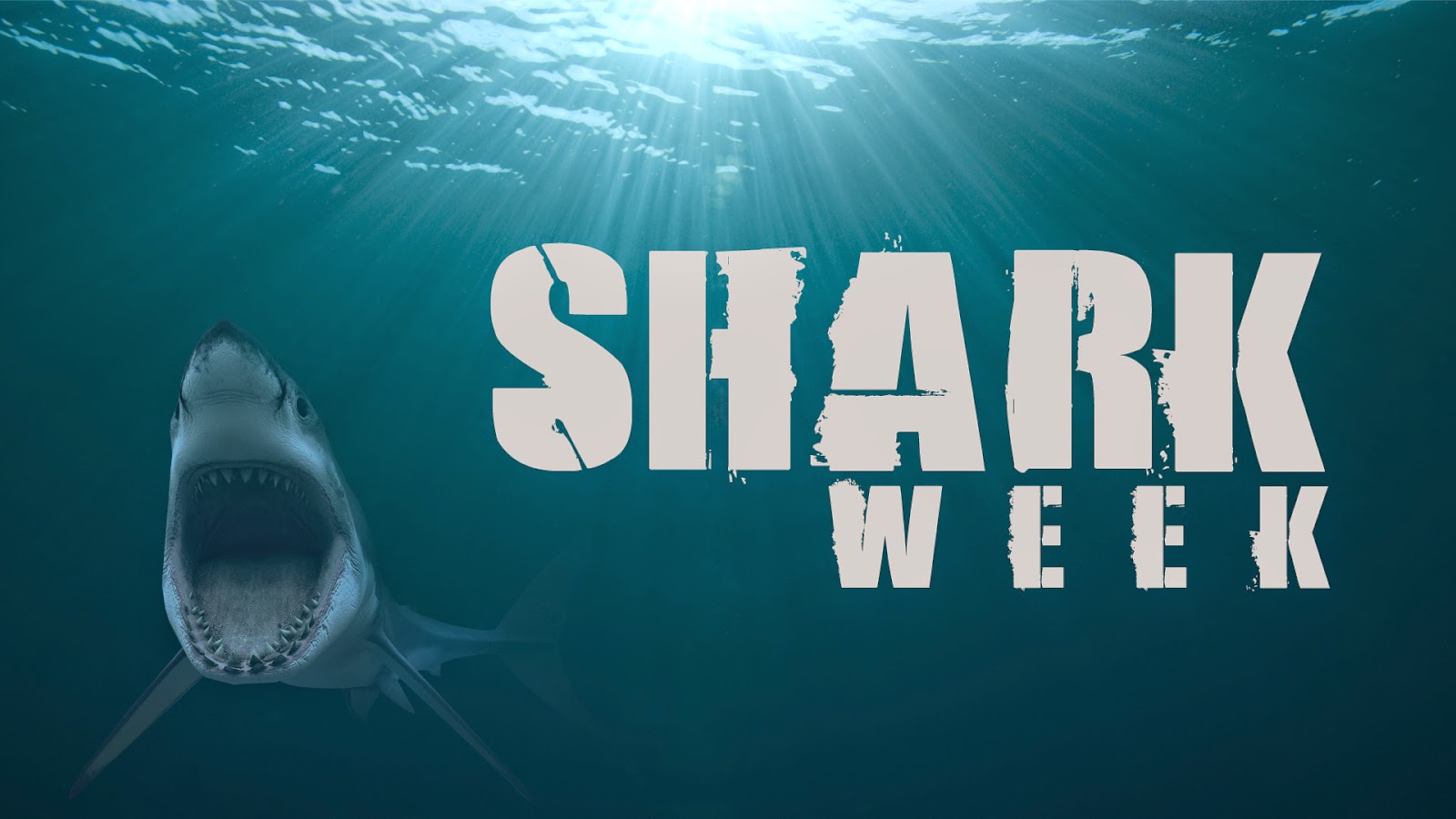 Shark Week is over for another year, and this year the Discovery Channel saw higher ratings than any Shark Week in history. But, is everything we saw worth believing?

All Things Considered, a production of National Public Radio (NPR) takes a look at the innocent and not-to-innocent bending of facts used to achieve higher ratings or facilitate filming.

"The line between authentic documentaries and so-called "docufiction" can be blurry. Even some legitimate filmmakers have committed video fakery for the sake of a project."

Has Shark Week jumped the shark? Check out the article and 7-minute audio clip at NPR. And if you're not familiar with the phrase, 'jumping the shark', Wikipedia has an explanation.

Are you a mermaid fan? Are you also a fan of horror films? If so, then you will want to learn more about Killer Mermaid, a narrative film coming out soon on DVD and Video-On-Demand.

The details can be found at Horror Society, but note that the September 9th date listed in the article is incorrect. The date should most likely be September 13th.

We talked about this film before, but here is your chance to own it. For a sneak preview, watch the short trailer included in the article.

Stephen Burt sits down with poet Matthea Harvey to discuss a wide variety of topics including fables, images, and of course mermaids. The interview is a great read, and uncovers some of the complexities of Ms. Harvey's work.