I would like to start off this post by thanking my readers...  From the US to Russia to the United Kingdom to Italy, Belgium, and Australia, everyone loves mermaids!  Please continue to comment and email.  Hugs and splashes to all!

* * *
In August of 2011, I attended the World Mermaid Awards and Convention in Las Vegas, Nevada, USA.  This was a memorable adventure for me in many ways.  Let me share some of them with you.

August 10th:  The trip from north Texas to Las Vegas took me two days by car.  At the end of the first day of driving (~600 miles), I stayed overnight in Moriarty, New Mexico.  The motel was just off the highway, with a gas station across the street, and a number of places to eat nearby.  The rain was most welcome, as the weather had been very dry back in Texas.

August 11th:  I arrived in Las Vegas around dinner time on the second day.  The first event of the convention was a Book Signing and Meet & Greet at a Barnes & Noble book store at 7pm.  Since I had arrived early, I had time to eat dinner at a nearby restaurant.  I soon noticed that not far away, the convention organizers and special guests were having dinner at the same restaurant. 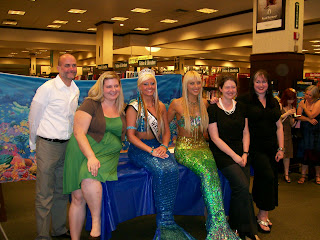 The Meet and Greet was great fun.  I had the pleasure of meeting Mermaid Hannah Fraser, one of the most well known mermaids in the world.  I also met Mermaid Kylee Troche from Weeki Wachee Springs, Florida, and authors Carolyn Turgeon and Tera Lynn Childs.  The short video I took of Hannah speaking has had over 860 views on YouTube!

After the Meet and Greet, I drove to the Silverton Hotel and Casino, the location of the convention.  From the Mermaid Bar to the mermaid paintings on the wall to the huge fish tank, we merfolk felt right at home.  I spent some time looking around the casino, trying my hand at a slot machine with the $5 you get when signing in.  I must say I did not do too well.

August 12th:  The convention officially took place on Friday the 12th.  Daytime events included a mermaid  pageant, art silent auction, and vendor tables.  In the evening, the merfolk and fans gathered at the hotel pool for a pool party.  Mermaids Hannah Fraser and Medusirena performed for the crowd.  There was much swimming, splashing, chatting, and friend making.  The mermaid awards were announced as we watched the full moon overhead.  We spent at least two hours in the water, and enjoyed every minute. 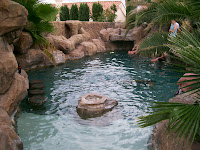 August 13th:  On Saturday, there was a VIP pool party at a private home in the northern part of town.  The pool, as you can see from the photos, was beautiful.  Many photos were taken as the mermaids and mermen got their tails wet once again.  My profile picture was taken here as well. 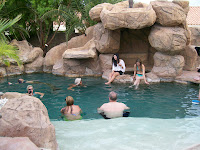 A threat of rain early in the day almost caused the pool party to be cancelled.  When it was decided that the pool party would happen, it was too late to tell the catering company that we were back on.  As a result, only light snacks were available at poolside.  Upon returning to the hotel, I decided to go to a pizza place just off the casino floor.

The guy waiting on me at the pizza place saw my mermaid themed tee shirt and asked me if I was with the convention.  I said that I was.  He then asked me if I believed in mermaids.  "I have to", I said, "I am one."

August 14th:  Sunday was check out day, and the beginning of the long drive back to north Texas. Sure, not everything went smoothly at the convention, but I had a great time, and I am very glad I went.  I met some great folks, and had a great time splashing around with everyone.  I hope to be able to attend more of these events in the future!

More photos from WMA 2011 can be found on my website dedicated to the event.