It was just over a week ago that Animal Planet first ran its latest mermaid themed 'documentary', Mermaids: The New Evidence. The show certainly generated a lot of waves... from mermaid fans to scientists, everyone has something to say.

Marine biologist David Shiffman wrote a lengthy article that can be found at Slate. He was shocked to see that Animal Planet had created a sequel to Mermaids: The Body Found.

Mr. Shiffman reminds readers that no scientific evidence has been found to support the existence of mermaids, and criticizes the network for not spending more time pointing out the dangers facing our oceans. The over-harvesting of fish, for example. He says that even without mermaids, the ocean is still full of wonder, and it needs your help.

Blogger Diana Beebe also covered the story in her blog, Mermaids Don't Do Windows. Diana writes, "Mermaids are in the collective consciousness of mankind because people have imaginations. People want to believe that they are real. Who doesn't?"

Robert Chan of Yahoo TV posted an article this past Saturday entitled, Mermaids: Nonsense or Nuisance? He writes, "There's really nothing wrong with using actors to re-enact scenes for a documentary. But where is the line?"

Mermaid Raina was just one of dozens that took the discussion to Twitter, "Speak for yourself I'm real and pretty super :p more real than a MOCKumentary ;)"

A friend recently introduced me to the work of artist Audrey Kawasaki. While her painting entitled Enrapture has a definite mermaid theme, many of her other works also have an aquatic feel.

Do check out the Doodles and Misc pages of Audrey's web site for more examples of her talent. The Info page provides readers with her biography and contact information.

My blog post on Scarborough Faire has been very popular. As I have a number of unpublished photos, I will be presenting one or two per week as space permits. Some of the photos will be mine, and some will be from other contributors. 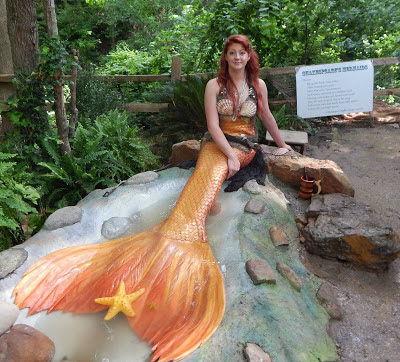 Today's photo is by Bart de Boisblanc and introduces us to the fourth mermaid. If you missed the other three mermaids from the faire, check my previous two blog posts.

Dolphins have been used for locating underwater mines, but recently they found something quite unique. Two dolphins discovered a Howell torpedo off the coast of southern California.

Read the details in an article by Travis Andrews at Dvice, a web site for Tech, Art & Design, and Science.