I am happy to share with you the news that the Mako Mermaids production team is hard at work on season two of the sequel to H2O: Just Add Water. In their first video log (vlog), Sirena (played by Amy Ruffle) introduces us to Mimmi (Allie Bertram), a new mermaid appearing in the second season.

The video is from Jonathan M. Shiff Productions, and you can subscribe to hear about future offerings.

If Mako Mermaids isn't shown on television in your area, you can find the entire first season on Netflix.

And, here is a cool behind the scenes video featuring the season one cast. The video contains some great shots of how the tails for the show are created, and how the cast is trained to swim with them. 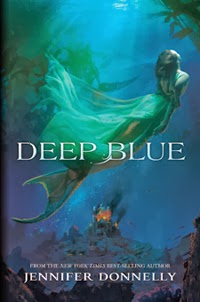 Disney is set to launch a multi-platform mermaid saga by Jennifer Donnelly, the Waterfire Saga. The saga opens with Deep Blue, where we are introduced to Serafina, a Mediterranean mermaid. A strange dream provides her with clues to the return of an ancient evil.

In addition to printed copies, the book will also be available in audio form. Deep Blue is set to be released in early May of this year, and the second book in the series should be available in January of 2015.

Learn more about Deep Blue and the Waterfire Saga in these articles at D23.com and Publisher's Weekly.