We all love the ocean, beautiful yet untamed. But would you give up almost everything you have to spend 3 years living on a small yacht? This is exactly what one family of four did, as told in the book Far Horizons by Elsie Mackie. 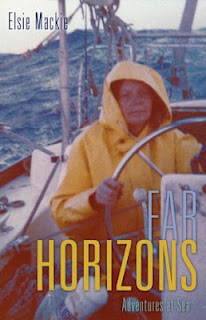 The book is available online at Amazon and Barnes & Noble where it is described as follows:

The MacGregor family encountered certain death many times. The lives of four members of the family were thrown into chaos when the father had a mid-life crisis. He sold their home, most of their personal possessions, and moved the family to a sloop-rigged yacht.

The wife was trained by her stepmother as a child. She learned to anticipate needs. She learned obedience in fear of punishment. She became dependent on her husband and gave in to his decisions.

Adverse weather conditions, danger from commercial ships, pirates, lack of modern conveniences worked on the family. Escalating incidents unfolded every day. The husband insisted on his own way. The navigational course was aborted when heavy seas and winds crippled the yacht. The captain enforced his demands. His wife, the first mate, feared his tactics. She cherished the safety of her family. The children were five and eight years of age. Join in the adventures aboard Far Horizons.

Far Horizons is also available for the Kindle and Nook. Watch the two minute video trailer on YouTube!

I recently received a very nice note from Mermaid Loui, otherwise known as The Mountain Mermaid. Originally from Florida, Loui now lives among the mountains of Colorado. In her short note she said, "I was researching mermaid music... and somehow swam right into your blog!" Mermaid Loui also has a blog, so why not stop by and say Hello! 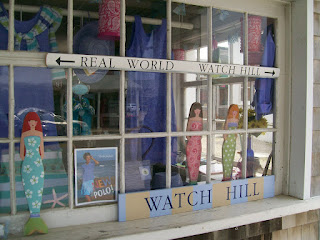 Do you have a question? Please send it to me at the email address below.

Question: Are there mermaid shops in New England?
Cynthia: I haven't been to New England since the summer of 2009. At that time, there was a small shop in the village of Watch Hill, Rhode Island with a cute mermaid display in the front window (see photo). If anyone currently lives in the area, I would like to know if the shop is still around. I would also like to know if there are other mermaid-friendly shops in New England.

We mermaids have become so popular, that we are sometimes mentioned in the description of products that have nothing to do with mermaids. In an article about TellTails, Large Wearable Animal Tails for People, was the phrase, "If a custom made mermaid tail wasn't your thing..." Based in the UK, Kigu sells the TellTails in a variety of styles including Squirrel, Lizard, Lion, Fox, and Lemur. Something different for the Renaissance Faire.