In a recent Gizmodo 'Winter Break' article by Kyle Wagner, we learn that wild dolphins at an Australian resort will occasionally give gifts to humans. So, if a dolphin ever offers you a squid, be sure to smile and say thank you!

Merfolk, have you ever been offered a gift by a dolphin? If so, tell us about it!

I did an article on the Australian television show, H2O: Just Add Water in my February 15, 2012 blog post. In that article, I mentioned being part of a Twitter live chat with Phoebe Tonkin who played Cleo (center in the photo) on the show. At the time, I could not locate the text of the chat. 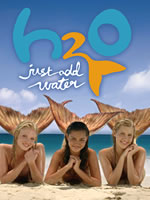 Recently, I was able to locate some of the tweets from the chat which took place on October 17, 2009 by scrolling back in Twitter over 3 years. I don't have everyone's contribution, but I do have quite a bit. The names of other members of the chat have been shortened for privacy.

At this point, let me say that I have no proof that it was the real Phoebe Tonkin. I'd like to believe it was.

The chat turned out to be quite long, so I am putting it in a separate page. Hope you enjoy it!

Learn more about Phoebe Tonkin at this web site. Some good information, though perhaps not a good choice of color scheme.

Q: In which H2O episode did Emma dye her hair bright red?

A: That was in the season one episode 'Red Herring'. As Emma was in mermaid form at the time her hair was dyed, the color came out exceptionally bright. It turned out to work in the girls' favor, as Zane failed to recognize Emma when he saw her in the water.