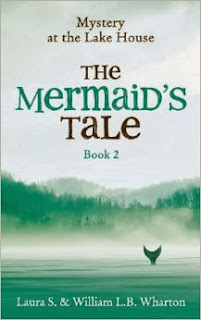 The Mermaid's Tale by Laura S. and William L.B. Wharton is the second title in their Mystery at the Lake House series. Tyler Tichelaar has done a fine job of reviewing the book, and you can see the review at Seattle Pi.

"Jock is skeptical when Chip says he saw a mermaid, but Lynna thinks they should believe her brother."

According to the review, the authors consulted with a real mermaid during the planning stages of the book. The book can be found in paperback form at Amazon for $8.99 US.

Animal Planet recently ran yet another mermaid special, “Mermaids: The New Evidence – The Extended Cut.” Programs such as these have prompted so many calls to NOAA (National Oceanic and Atmospheric Administration) that they now have a section of their web site dedicated to addressing the volume of questions.

An article on the new Animal Planet offering can be found at Examiner.com, but do be warned that the site will throw a number of popup ads at you. Not cool.

On Friday, this blog turns two years old! The first edition of Cynthia Mermaid was published on Blogspot on December 20, 2011. The first article was entitled Music for Mermaids. A total of 130 articles have been posted so far, and approximately 57,400 page views have taken place.

Thank you all, my readers, for visiting my blog and for sharing it with others. Do keep in touch, and let me know the kinds of articles that you enjoy. My email address is below.

Note that no correct answers have been received for the Treasure Hunt 2013 contest. The contest will officially end on December 31st at midnight US central time. No entries will be accepted after this date.